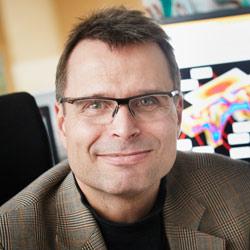 Born in 1963 in Trollhättan, Sweden Anders Jarfors is, with his resent move to Jönköping, is almost back where it all started! He has a MSc, and PhD from KTH. In 2000 he was given the title Docent.

In 2000 he left KTH for Singapore Institute of Manufacturing Technology, (SIMTech) supporting the contract manufacturing industry in Singapore and Malaysia making mainly, telecom and automotive components. In 2003 he was seconded to MMI Holdings as acting Head of Engineering responsible for casting, brazing, plating and design.

In 2007 Anders Jarfors returned to SIMTech. The main research work was related to casting with work focusing on casting the un-castable, for electronics cooling and domestic appliances, as well as for  automotive components. In 2009 he returned to academia as Adjunct Associate Professor with School of Mechanical and Aerospace Engineering at Nanyang Technological University. Here the research focused on superplastic forming,  micro-stamping and cast ultra-high strength biocompatible Mg based metallic glasses.

Since August 2011 Anders Jarfors is Professor in Materials and Manufacturing–Casting.