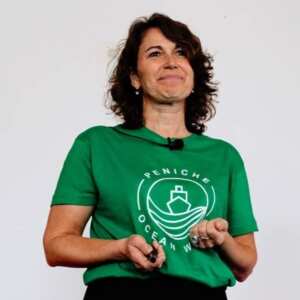 How does the convergence of disruptive technologies transform long-standing institutional structures and lead to new forms of value-creation? How can digital technologies enable the circular economy?

Robin Teigland is Professor of Strategy and Digitalization in the Entrepreneurship and Strategy Division at Chalmers University of Technology in Sweden as well as a Fellow of the Royal Swedish Academy of Engineering Sciences, the Director of Ocean Data Factory Sweden, and a faculty member of Singularity University – Portugal. Robin has worked in a variety of firms, such as venture capital in Silicon Valley, a medtech startup in Norway, Esso in Chile, and McKinsey & Co in Sweden and Spain.

Just a few years ago, Robin decided to turn her knowledge from more than 25 years of research into entrepreneurial action and co-founded Peniche Ocean Watch – an initiative leveraging digital technologies for a blue circular economy, which has resulted in several sustaintech startups in Sweden and Portugal, including Ocean Tech Hub Lda, Circular Ocean Lda, and Ekbacken Studios AB.

Robin is originally from Nashville, TN and obtained her BA in Economics from Stanford, an MBA from the Wharton School, and a PhD from the Stockholm School of Economics. Her hobbies include watching her five kids play basketball and doing all kinds of sports, including surfing at her surf school, Go4surf in Portugal. More information is at www.robinteigland.com.

Robin loves to explore how emerging technologies challenge our taken-for-granted assumptions around value creation in society, and she has co-authored more than 100 articles and books in this area. Feel free to check out her recent series of co-edited books on the future of labor and society published by Routledge – freely downloadable on Amazon.

Currently, Robin is involved in several research projects investigating areas such as the impact of AI on innovation and strategy and how digital technologies can enable the circular economy. She recently received Produktion2030/Vinnova funding to lead the OCEAN-LSAM: Organizing the Circular Economy through a Network of LSAM Microfactories.