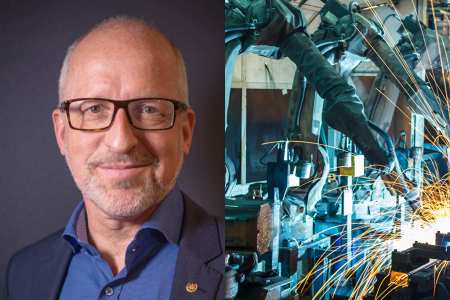 Johan Stahre: The global industry is not always so resistant, just look at the unfortunate containership in the Suez Canal. An event like that hinders subcontractors from delivering and the car industry are forced to stop its production... A clear example of how non-resilient our world currently is.

The entire world is gasping for straws in order to make it out of a pandemic, a climate crisis, and geopolitical tensions. This is when the term resilience shows up as a buzzword and a cure. The leader of the EU Commission, Ursula von der Leyen, speaks of resilience and sustainability through digitalization and when you build resilience you create sustainability.

Resilience is nothing new, as it was used during the 17th century to describe people and objects who would “bounce back” after getting “shoved”. Resilience Engineering existed long before we even started talking about sustainability, and it is about building buffer zones or protection to endure unpleasant events. It can be seatbelts in cars preventing you from getting injured during a crash, it can be security instructions for airline pilots, smart maintenance to prevent machines from breaking, or artificial intelligence being used to predict diseases in time.

Resilience is especially important for the companies working with industrial production. They are dependent on international supply chains and have collaborations all over the world. The pandemic shows that the industry is not always particularly resilient as the virus stopped the production of many companies as their workers were forced to stay home due to the pandemic. Even just small events matter, just look at the unfortunate containership Ever Given, that blocked the Suez Canal and stopped deliveries from arriving on time. These are clear examples of how vulnerable and non-resilient our world currently is.

A lot of companies that have been working under Lean for a longer period of time during the good times have decreased their buffers, optimized their resources, and earned a lot of money. Those who have only interpreted Lean as to mean that the organisation and resources should be as “slim” as possible might find themselves in trouble now as they have small chances of parrying the effects of lost container loads or a disrupted supply chain. There are likely some consultants that will be reprinting their business cards from “Lean-expert” to “Resilience-expert” and working to pandemicproof workplaces or to organize double value chains. Some build walls, others open up to help out, but the basic meaning of resilience is to create better opportunities to easily be able to “bounce back” when we find ourselves there, in the middle of the futures pandemic or climate crisis.